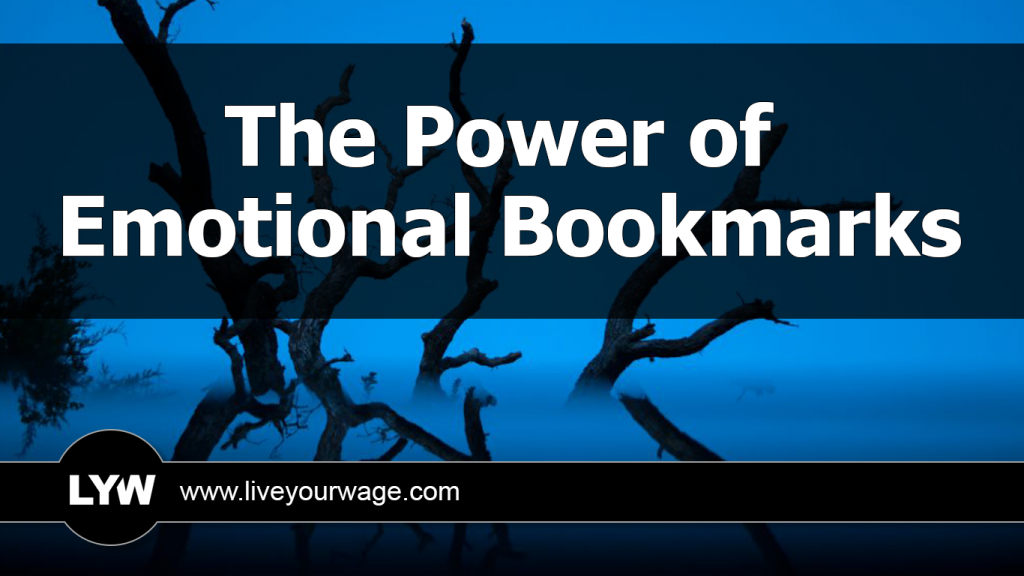 In 2006, my wife and I made the choice to quit my job, leave everything we had known, pack our entire life into a truck, and move to another city 200 miles away.

We arrived in the new city with just over $3,000 in our bank account and no jobs.

Over the next 3 months, as I frantically looked for work and our bank account dwindled closer and closer to zero, we experienced a variety of emotions, but very different ones for each of us.

My wife experienced fear. She’s a planner and likes to know what’s happening next week and next month and even next year.

Many of you can probably relate.

I, on the other hand, was pretty cavalier about the endeavor, which only served to infuriate my wife who felt she was having to do twice the worrying to pick up my slack.

My attitude wasn’t driven by not caring, but I was convinced enough that moving was the right decision, and that allowed me to cling to a this-will-all-work-out attitude.

We were both in the same situation. Neither of us had any idea when I would find a job. And neither of us knew what we would do when the money ran out.

And yet we had two very different responses to the situation.

Our emotions are very powerful things, and when we mix emotions with money, we’re just asking for a mangled soup of behaviors and reactions that often make no logical sense.

Perhaps you know someone who is doing well financially but still has a strong frugality bias. They purchase things rarely and cheaply, even though their financial situation suggests they could loosen the purse strings a bit.

Or maybe you know someone who is generous to a fault. They are constantly paying for group lunches or giving away their last dollar, while their own family struggles to pay the light bill or buy groceries.

These actions often make no logical sense, but to these individuals, their behavior makes perfect emotional sense to them.

Emotions are Stronger and Faster Than Logic

What this means is that the emotion comes first (in this case, flight) – which triggers running – while the feeling of fear actually comes later.

Antonio Damasio, neuroscientist and professor of psychology, philosophy, and neurology, at the University of Southern California, talks about how our brains create emotional bookmarks, called “somatic markers”.

These bookmarks are emotional shortcuts that can be triggered in an instant without the need for the slower logical processing components of our brains.

Once the bookmark is set, just the thought of a motorcycle or a lawnmower or a dentist can instantly trigger the correlated emotion.

Whether we realize it or not, we all have emotional bookmarks about money.

If we grew up in fear of going hungry or not being able to buy new clothes for school, that gets bookmarked.

If we grew up never thinking or caring about money because our family had some, that ambivalence toward money also gets bookmarked.

Either scenario can result in wild and weird money behaviors as we grow up and start managing (or mismanaging) our own money.

In particular, when a bad outcome connected with a given response comes to mind, we experience an unpleasant gut feeling (emotion).

We often end up making choices that counteract that gut feeling, but without necessarily being able to explain why (logic).

It’s an emotional comfort that says we are ok and we’re doing well in life, which may not be true, but the emotional bookmark is stronger than reality.

For some, the emotional bookmark of not having enough money is so strong that even as they gain more and more wealth, they continue to save and scrimp and hoard every extra dollar they can, often to the detriment and confusion of the loved ones around them.

Discovering our emotional bookmarks can be incredibly difficult to do on our own since creating them was not a conscious choice on our part.

But if we don’t talk to others and get feedback on our behaviors, we can go far too long making irrational decisions that satisfy an emotional need we don’t even recognize, all the while putting our long-term health, wealth and relationships in jeopardy.

When it comes to money, our emotional bookmarks don't change just because the dollars in our bank account change.Click To Tweet

Today my wife and I stand in a very different financial position than we did back in 2006.

In June I retired from my job as we’ve amassed a 7-figure net worth – a far cry from the $400 we had left in the bank when I finally found a job so many years ago.

And yet this new adventure, much like our 2006 adventure, is triggering some of the same old emotional bookmarks.

Not having a steady paycheck coming in every 2 weeks is scary for my wife.

We’ve done our retirement budget and it’s leaner than we would like these first few years as we hedge against a looming bear market.

Meanwhile, I’m pretty cavalier about this new adventure, which, again, seems only to increase my wife’s anxiety.

The important thing we are discovering is that when it comes to money, our emotional bookmarks don’t change just because the dollars in our bank account change.

It’s easy to imagine that having more money will quell those misguided emotional bookmarks, but it won’t. They will continue to pop up, time and time again.

If we don’t learn to recognize these emotional bookmarks about money, and the behaviors they cause, our next bookmark may be “dealing with money = pain”, and that will lead to a whole new set of misguided behaviors.

What emotional bookmarks around money have you recognized in your life? What behaviors have they resulted in? Were those behaviors good or bad for you and those around you? Let me know in the comments.

How We Paid Off Our Mortgage in 7 Years

We Paid Off Our Mortgage in 7 Years – Here’s Why