Home
/
Financial Thinking
/
The Hidden Cost of Living Like Everyone Else
August 29, 2019 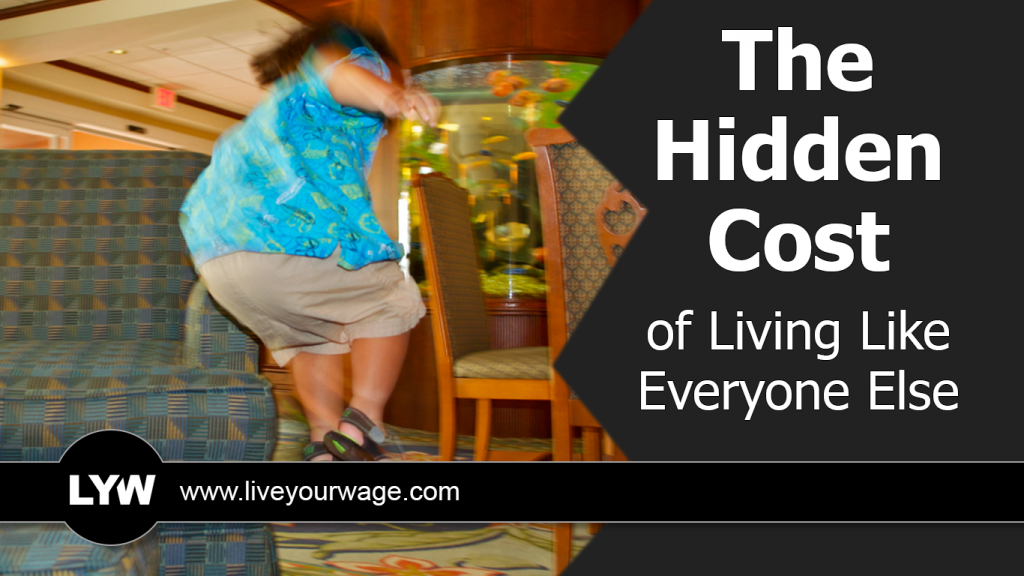 Extending one of the many footrests had the magical effect of dissolving my most nagging worries.

Imagining the beverage of my choice cooling in the cupholder while watching any movie of our choosing was the exact experience that had drawn us into this fantastical furniture superstore.

But we just couldn’t do it.

We had the money to pay cash, but that wasn’t the issue. There was something else.

The fancy new overindulgent couch we were lounging on was going to have to sit in the showroom a while longer and tempt someone else to part with their hard-earned money.

It wasn’t going to be us. Not on that day at least.

It turns out the cost of something isn't just the loss of money, but also the loss of the opportunity to do something else with that money.Click To Tweet

You see, we were in need of a new couch.

Ok, need might be pushing it. We wanted a new couch, but you would too if you saw the couch and love seat we had back at home.

They were the couch and love seat that I bought slightly used from a friend’s mom’s friend way back when I moved out of my parent’s house and into my very first apartment.

They were big and soft and still very nice when I bought them. I don’t think they were more than a year old.

But that was years ago. At the time when my wife and I ventured into the furniture store looking at fancy new couches, we had moved four times and amassed two offspring.

The couches had served many days as trampolines. The cushions had been used to build dozens of forts and tunnels. It wasn’t uncommon for every available cushion to be piled high in a huge stack in the middle of the living room to serve as a relatively safe landing pad as we launched our kids through the air.

Those couches had served us well, and it was obvious.

There were rips and tears throughout several of the cushions. The upholstery was worn in certain spots from little knees and feet that routinely landed or jumped from them. Sections of the seating cushions were fraying from giving so much life to our little family.

The bottom line was they were worn out and ugly.

Besides that, my wife never loved them. She didn’t get to pick them. They were the couches I brought into the marriage.

None of our friends had couches that looked as bad as ours, a detail that did not go unnoticed by us…or them.

Opportunity Cost – The Hidden Cost of Keeping Up

My wife and I were sitting in a financial class when the topic of Opportunity Cost came up. Neither of us had ever heard the term, but it immediately made sense.

If we used $120 on an annual subscription to Netflix, that $120 was unavailable to use for a weekend getaway.

It turns out the cost of something isn’t just the loss of money, but also the loss of the opportunity to do something else with that money.

Over the last decade we’ve discovered that in more cases than we expected, the lost opportunity mattered even more than the money.

Do We Need Anything Else More Than This?

On our financial journey, we’ve had to make a lot of decisions about what NOT to buy.

As we became more financially stable, and capable of affording more things we wanted, we needed a new way to make decisions about what we would and would not buy, especially as we saw our family and friends and co-workers racing past us in the lifestyle inflation game.

The concept of Opportunity Cost became that framework.

It manifested itself in the question, “Do we need anything else more than this?”

Standing, or sitting rather, in that furniture showroom shopping for couches, we got our first glimpse at what new couches truly cost.

But the truth was we had the money. We could afford any of the couches we saw in there.

Dropping $5,000 on a new couch would have been nice, but we had to ask ourselves this very important question:

Do we need anything else more than this?

That one question has literally saved us tens of thousands of dollars over the years.

We've learned that if we are willing to say no often enough over the course of several current moments, eventually we're able to say yes to things that matter so much more in future moments.Click To Tweet

You see, on the day we were in that furniture showroom, we were starting to have discussions about retirement while also being neck-deep in operation Mortgage-Be-Gone, so we definitely had more important things to do with that money.

Buying a new couch would have been nice. Looking at our old couches, some would probably even say it was necessary.

But in that moment, was it more necessary than paying off our mortgage or investing the money in our retirement accounts?

Learning to say “no” to ourselves is powerful.

And the answer is rarely a no forever.

Today I am My Future Self

We’ve learned that if we are willing to say no often enough over the course of several current moments, eventually we’re able to say yes to things that matter so much more in future moments.

In fact, most of us struggle with saying yes too often, and that can cost us significant opportunities at even better things in the future.

It’s hard, but we constantly have to consider our future selves.

Today I am my future self sitting on a nice soft luxurious couch, typing away at home on a Thursday afternoon all because my past self was willing to say no when it wasn’t the right time.

On that day, my wife and I left the furniture store and drove home with nothing.

Well, not nothing. We went home with $5,000 ready to be used for something even more important.

That Was Stupid: Renting a Cable Modem

The Day My Podcasts Died

40 Financial Blessings For My 40th Birthday

7 Steps to Buy a Used Car With Cash