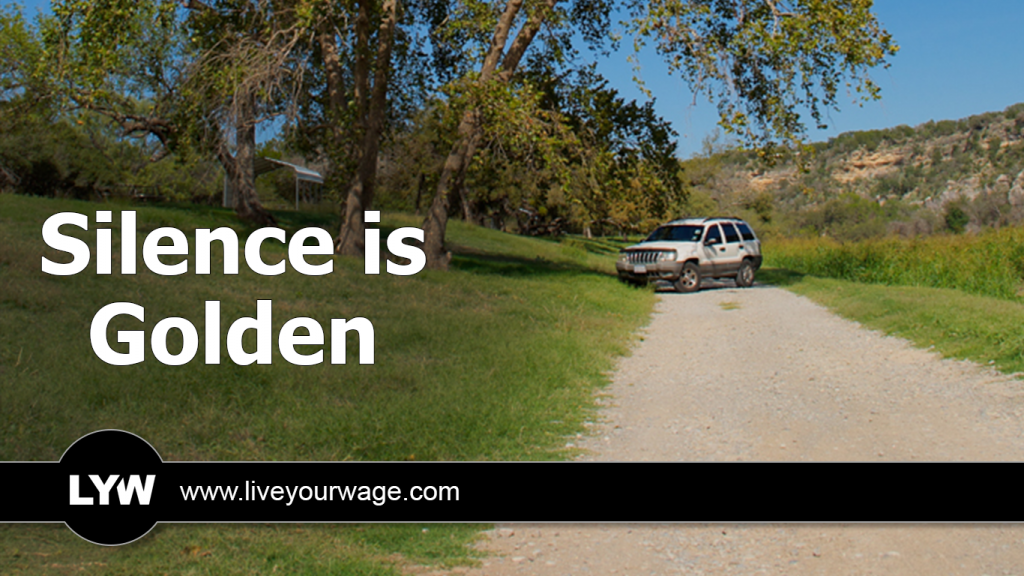 This is a journal entry I originally wrote on January 6, 2012. I recently re-discovered it and realized it includes so much of what has helped us be successful, not only in our finances, but in life. I’ve chosen to post it as originally written, only removing family names and personal information where necessary.

Have you ever tried to do nothing? I mean literally nothing. It’s really hard. So hard that many of us quit trying somewhere after college.

We’ve become such an adept society of something doers that we often get so enamored with doing things that we can forget why we’re doing them in the first place.

Sometimes we even neglect facts that indicate something we’re doing may not even be the right thing to do anymore.

So for a change, let’s take a moment and see how well we can do nothing. Consider this your practice test.

Click here. (It will open in a new tab. Go ahead. Practice.)

Screw This! I Have Stuff To Do.

If you’re like me, trying to do nothing for two minutes is nearly impossible. It feels stupid. It feels like wasting time. And after about 18 seconds my brain screams “Screw this! I have stuff to do.”

It’s true. I actually do have stuff to do, and getting many of those things on my ever-growing list done is important – not just to me but to many folks around me as well.

But somewhere in the back of my head is this little voice that is always questioning if I’m really working on the right things, the most important things – things that will really matter 5, 10 or 15 years from now?

Or am I just knocking off trivial to-do items because…well…I like the endorphins my brain releases when I check things off a list?

We are so saturated with TV, movies and the internet that we trade boredom for distraction.Click To Tweet 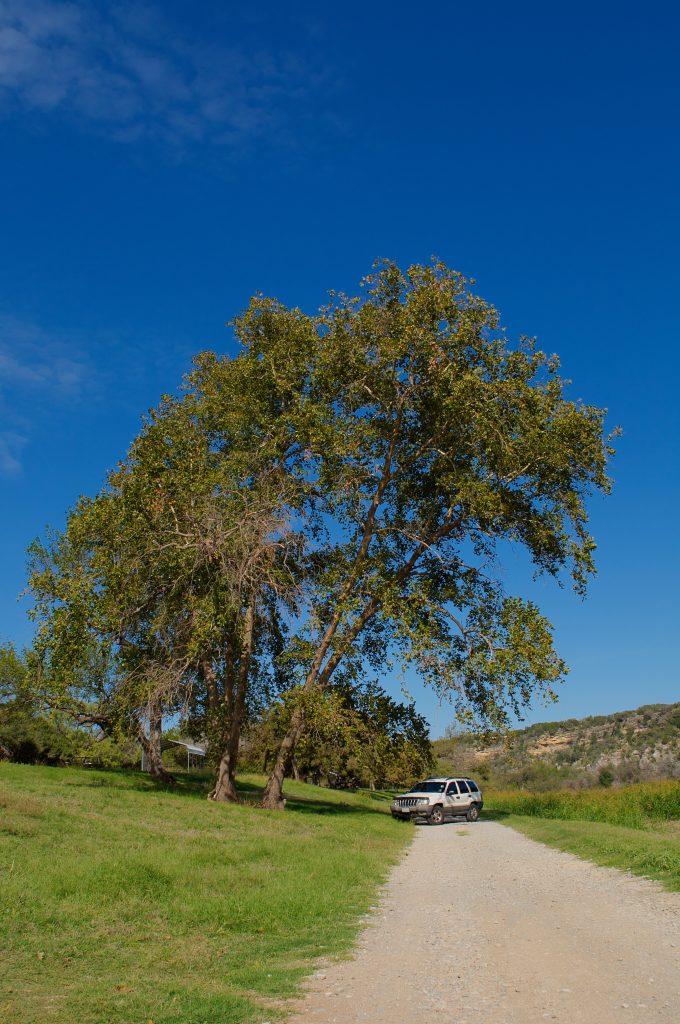 Hanging out in the middle of nowhere.

It was these kinds of thoughts that prompted my wife and I to institute what we call our Annual Silent Retreat. It’s not an official thing, it’s just a few days to get away from all the daily tasks, non-stop noise and easy distractions that assault us each day, turning us into little taskmasters and distraction junkies.

This is not a vacation.

It is not a 3 day, 4-night all-inclusive Caribbean excursion.

Those are vacations and are very important. But this is definitely something different.

The only rules for our silent retreats are:

Space for thinking and dreaming is the ultimate goal. And what we discovered is that when we eliminated all of the noise and distractions, we had better be prepared for some pretty intense time with our brain.

Oh, and we do our silent retreats separately. We’ve found that when we’re together we are often really wonderful (or not so wonderful) distractions for each other.

I went on my first silent retreat 3 years ago. I decided on tent camping at a secluded 140-acre campground along the Colorado River that we discovered years ago.

We liked this place because it was never crowded, so it seemed like a perfect spot for some R&R and introspection.

Home for the next 72 hours.

And this time was no different.

In fact, I soon discovered I was the only one there. I walked for miles along the riverbank without seeing another soul, and truly felt like I was the only person on the planet.

And that was actually kind of perfect.

Without the normal distractions of TV, movies, the web, or even kids or a spouse, I discovered my brain went into overdrive trying to fill the void.

I thought about everything: my entire to-do list at work, my even longer to-do list at home, every single event coming up in the next few weeks and even things I had forgotten to do yesterday or last week.

Then I shifted into conversations that I needed to have at work, and at home, and with my parents and family, and I had every single one of those conversations right there in my head. (They’re so much easier to have in my head.)

See why this isn’t just a typical vacation. It’s a lot harder – and a lot more meaningful.

What do you think of when you’ve thought of everything?

On each of my silent retreats, I’ve discovered it takes about 5 to 6 hours for my brain to process all the immediate stuff that’s been going on in life.

It’s like all these thoughts have been dammed up in the recesses of my brain, and instead of letting them flow out in regular healthy bursts, I’ve just been turning on the TV or surfing the web and ignoring them.

But without any of my go-to distractions, that dam breaks pretty quickly and this deluge of ideas, memories, feelings, and tasks comes raining down…but mostly in a good way.

Rock pile in the river bed.

It’s probably a misconception to think that on a silent retreat you do nothing. If you’re the type who cheated on the practice test and just ignored your computer for 2 minutes while you checked email on your phone, then you already discovered that it’s impossible to truly do nothing.

At the very least, thinking is the one action that never goes away.

But the critical question is what do you think about when you’ve finally thought about everything you can think of?

I just returned a few weeks ago from my most recent silent retreat and discovered something.

When is the last time you were bored? I’m guessing it was probably when you were 12. As adults, boredom doesn’t seem to be a rampant problem for us. Why is that?

I’m sure there are lots of reasons, but I think there are two main ones.

And second, we are so saturated with TV, movies and the internet that we trade boredom for distraction.

We can simply choose pleasant distraction over boredom every single time, and we usually do.

But what I discovered is that the very best part of my silent retreat doesn’t really start until I get bored.

You see, when we choose distractions over boredom, we never get to see where our minds wander when given significant periods of time to think.

These distractions prevent us from thinking about things that are bigger than just tomorrow’s task list or next week’s assignments and social gatherings.

When we flip on the TV or stalk our friends on Facebook, we never give ourselves the space to figure out where we’re going. We end up living a very short-term existence… and wind up in places we never thought we would.

Driving where the river should be.

Focus on the Future

On a more recent retreat, I holed up in a 7th-floor hotel room in Corpus Christi with a balcony overlooking the sea. (There’s something to be said for climate control if you’re going retreating in August in South Texas.)

It was about 2 o’clock on day two of my retreat when I hit the boredom wall.

I had spent the previous 24 hours processing everything I could think of.

I wrote down lots of stuff that I wanted to remember.

And I’d reviewed things I’d written from past retreats and spent hours thinking about what I’ve done with those thoughts and ideas since then.

Then I was done.

I was sitting in a chair looking at the wall, and my brain was toast. I found myself looking around for something to do, you know, because I’m a doer of things.

I was tempted to turn on the TV just for a bit, but I knew that could easily turn into wasted hours, and it was against the rules anyway.

I thought about going for a walk along the beach, but then I realized it was 2:30 in the afternoon and I’m a pasty white guy who forgot a hat and sunscreen and figured that could change things for the worse pretty quickly.

I had this unsettling feeling of angst all over me and I couldn’t figure out why. And then it hit me. I was bored.

And I didn’t enjoy it at all.

It felt weird and wrong and just about as bad as I remember from when I was 12.

But after about 10 minutes of trying to fix my boredom by thinking of something to do, I stopped. I just sat there and allowed myself to be bored.

And my tired brain began to wander. Not over all the immediate stuff again, but over new stuff.

Eventually, of course, we have to come back from our retreats. But that’s a beautiful thing. Sitting in a room and thinking about all these incredible ideas doesn’t actually change anything. We have to come home and talk about it and make decisions about what we’re doing in life and what we need to change.

These conversations have ranged from exciting to frustrating, but the hard work of changing course has always resulted in a newfound joy…eventually.

We have to remember that we’re designing a legacy, and it’s not created in a day or a month, but through long years of decisions, actions, and words.

After 72 hours of seclusion, we’re usually ready to come back home. And we arrive with a clearer understanding of what’s really important.

Just about everything we come home to is the same as we left it, but it all feels just a little fresher, a little sweeter.

And we realize it’s not the things we left that changed.

There is life in the middle of nowhere.

Lesson of the Day: Do whatever it takes to figure out what’s important, and put that at the top of your list. (And you might need to re-figure it out annually or so.)

Have you ever confused needs vs. wants? ‍ I was

I love watching my young kids because they fail do

First day back at church since, uh...March? The

Words of wisdom from Warren Buffett. ‍ If we've

MONEY SAVING TIP ‍ Buy used, and if you have to

Grateful to be featured on Personal Finance Blogs