Home
/
Financial Thinking
/
But Everyone Else is Doing It
January 18, 2018 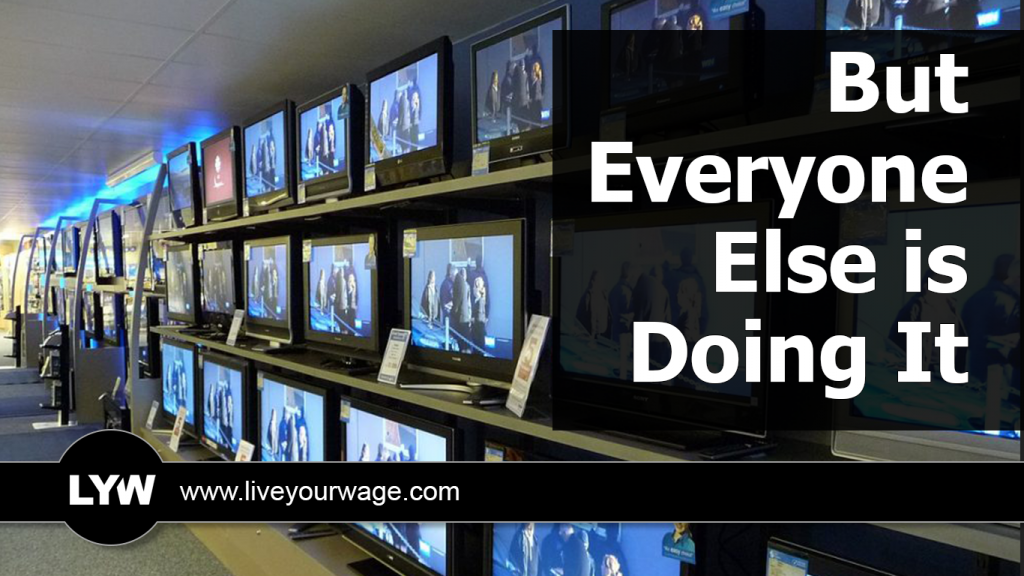 It’s likely the first thing you’ll notice when you walk into our house.

It’s the one physical thing that separates us from just about everyone else.

A Time of Change

In the past 20 years, there have been few home appliance revolutions as instantly recognizable as the flat-screen television.

Other modern changes in people’s homes have been more subtle.

Like those stainless steel appliances, smooth glass cooktop stoves, and the island counter smack dab in the middle of the kitchen.

Those changes happened, but it was a slow transition. And the truth is there just isn’t much fuss about a new dishwasher or refrigerator that looks like it was carved out of aluminum.

In contrast, the transition from large CRT televisions we all remember from childhood to today’s modern flat-screen TV’s has been incredibly swift and largely universal.

And make no mistake, during the early transitional years it was as bold a statement as any that you were a success and your house was awesome if you had one of these new unbelievably flat TV’s smack in the middle of your living room.

When people walked into your home and saw this incredibly thin sheet of glass either propped on a custom entertainment center or, gasp, mounted directly to the wall, they instantly knew you were awesome…and you had money.

That’s because in the early days of these new flat TV’s they could cost as much as $10,000. Clearly only the wealthiest and most successful people could (or would) put that much money into an appliance that you literally just look at.

As with all technology before it, though, things progressed relatively quickly.

Flat-screen TV’s got cheaper, they got bigger, they got brighter, and today some are even curved…because…uh…#marketing. 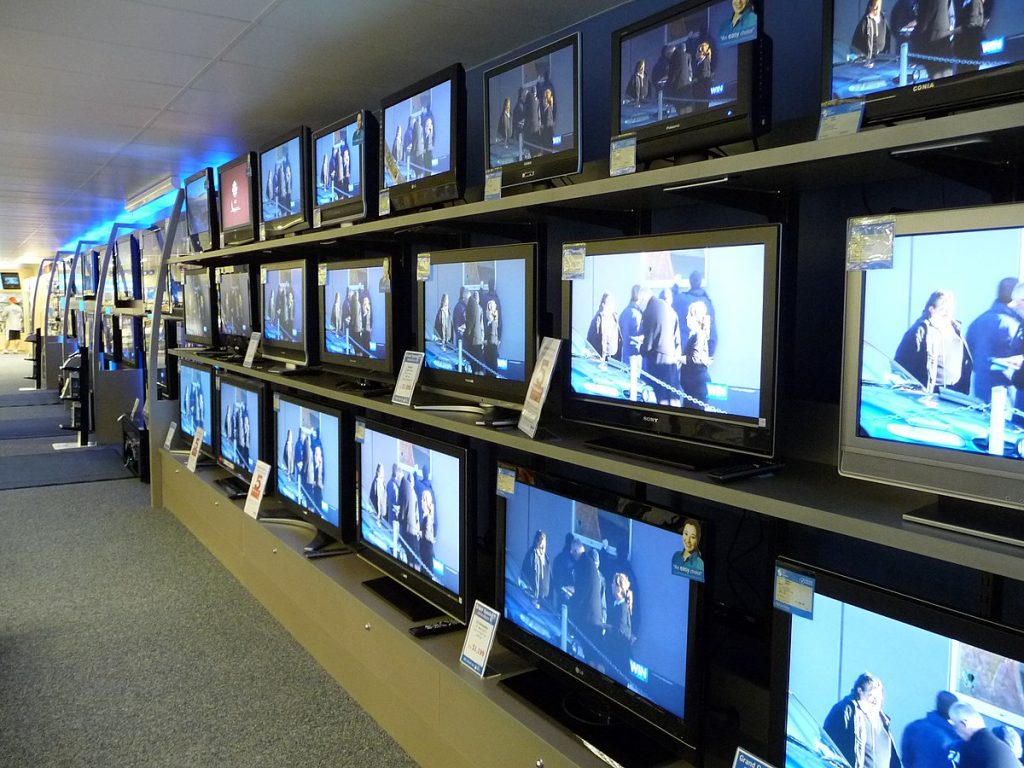 Over a 10 year period, we got to watch a generation that grew up thinking spending $1,000 on a TV was ludicrous suddenly start pouncing on “cheap” $3,000 flat-screen TV’s.

And in the short span of a decade, we saw an almost complete transition from old CRT televisions, to thin, bright, high definition flat-screen TV’s.

Right in the middle of our living room, one of the first things you’ll see as you walk in, is our boxy 32″ CRT television we’ve had for the past 12 years.1

And we haven’t upgraded it today when we can get a high-quality flat-screen TV for $500.

So what gives? Do we hate technology? Are we poor? Are we slowly turning our home into a museum?

None of those, actually.

In fact, we’ve talked about getting a new TV many times. 2

So what’s the holdup?

We've realized for a long time that building stealth wealth means becoming comfortable being the weird ones in many different situations.Click To Tweet

What’s Most Important To Us

Is a TV more important than having a car to get to work?

More important than being able to travel the world?

More important than paying off our house and being mortgage-free?

More important than funding our IRA’s?

More important than saving for our children’s education?

It turns out upgrading our TV has just never made it high enough on our priority list.

And we’re not sure it ever will.

Until it breaks. If that ever happens.

(They don’t build ’em like they used to, and we have one of those TV’s that they used to build!) 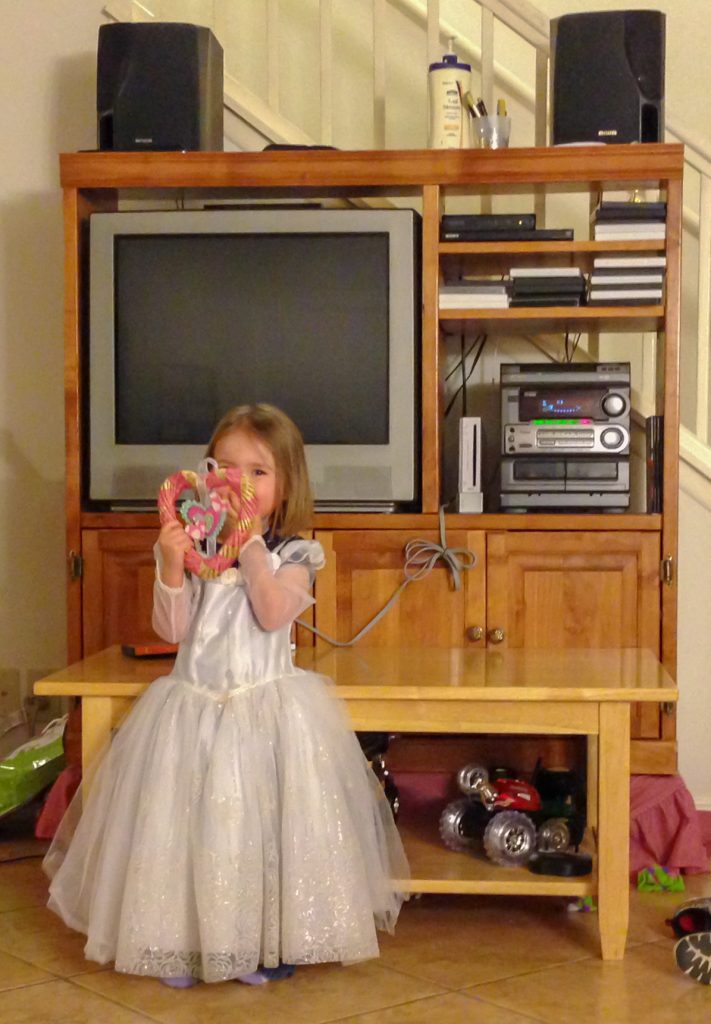 This picture was taken in 2015. Seriously.

Do We Need More TV?

Every year or so we sort of do an evaluation of our lives. We talk about what we’ve accomplished and what we hope to accomplish in the future.

We discuss what exciting things we’re passionate about. We do an assessment of what we want more of in life and certainly what we want less of.

And you know what never comes up as something that we really want more of or that we think will improve our lives significantly?

We’re not TV haters. We actually use our television and enjoy watching entertaining shows and movies. But we’re not TV lovers either.

We recognize there is a fine line between taking time to veg out, relax, and be entertained and becoming a zombie consuming the mind-numbing elixir that is sports, TV shows, movies or…ugh…cable news for hours and hours each day.

We heavily guard against becoming zombies.

That’s why, until recently, we never had any subscription TV service like Netflix or Hulu.

That’s one reason I have no idea what my co-workers are talking about when they start geeking out about Game of Thrones or Breaking Bad or Stranger Things or Walking Dead or Orange is the New Black, or insert pretty much any modern show here.

And that’s one reason getting a fancy new television may never creep it’s way up on our priority list.

There is a cost to this, though. Not a monetary one, but a social one.

My own parents have made some friendly jabs at us about our old TV. We know our friends probably get caught off guard by our ancient TV when they walk into our home. Most are too nice to say anything though.

'You know what never comes up as something that we really want more of or that we think will improve our lives significantly? Watching more TV.'Click To Tweet

We’re well aware that many people who walk into our home and see our TV make some kind of quick assumption about us. It’s just like having outdated carpet or linoleum floors or velvet drapes.

They probably look at our TV and just think we’re poor. (Hehe!)

But we’ve never felt social pressure to bump “upgrade TV” higher on our priority list to satisfy the impressions of others.

We’ve realized for a long time that building stealth wealth means becoming comfortable being the weird ones in many different situations. This is just one of those situations for us.

And one of the cool things is that our kids are completely oblivious.

Our TV is older than our kids. That means this is the only television they have ever known.

Our oldest is 7 and I’m not even sure he realizes that our TV is old.

At the very least he might realize our TV looks different than the TV’s he sees in other people’s homes, but he’s never made a comment about us not having a better TV or even just a flatter TV.

Our kids love playing video games and watching shows and movies on our 32″ boxy CRT television. They don’t make any comparisons to TV watching experiences at other people’s homes. They simply don’t care.

And neither do we.

What’s the Value in Having an Old TV?

Having an older TV isn’t a money play.

I don’t think anyone ever got rich by using the same TV for 20 years. You could argue it was a money play 10 years ago when we were buried in debt and the TV’s cost $10,000.

But where we stand today the tables have flipped quite nicely in our favor and money isn’t even a factor anymore.

For us, it’s as simple as don’t buy stuff you don’t need. The truth is we don’t need a new TV.

But sometimes, even if you can afford something, don't buy it. We all need a personal measuring stick where we evaluate our purchases based on what value it brings us.Click To Tweet

We often want a new TV.

We think it would be nice to have a new TV.

But we never fall into the trap of thinking we need a new TV.

Being able to travel is a more important want.

Being able to retire early is a more important want.

Even little things like getting our kids new bikes for Christmas is a higher priority want. (I’d much rather them enjoy being outside riding their bikes with friends than inside sitting in front of the TV.)

Not all decisions are strictly about money. If you can’t afford something, then don’t buy it. That’s a money decision.

But sometimes, even if you can afford something, don’t buy it. We all need a personal measuring stick where we evaluate our purchases based on what value it brings us.

Often the value of a new thing is simply in the endorphins released during the buying process. But 3 months later the value is completely gone. And so are the endorphins. And so is the money.

So find out your value system. Prioritize your needs and wants. And don’t let society tell you what’s important to you.

Only you get to choose what awkward talking points you want in your home.

Right before my wife’s brother got married, his fiancé gifted us her perfectly wonderful flat-screen TV she didn’t need anymore, so our entertainment situation has officially been upgraded. We even invested in a $29 Roku which has been a dirt-cheap way to watch TV.

Since I retired, I’ve been mowing my neighbor’s lawn. He’s a retired airline pilot from the Philippines and his wife works at the company I just left. They didn’t ask me to mow, but I know the husband is getting older so I just go knock it out when I mow mine.

As a thank you, we’ve been getting all sorts of amazing meals. His wife makes delicious traditional meals from the Philippines.

One day she randomly asked if we wanted a TV. They just got a new one and were getting rid of the old one.

We said sure. Nothing wrong with a free TV, right?

It turns out their “old” TV was a relatively new 55″ Samsung LED TV. It’s fantastic!

So our sister-in-law’s TV got migrated upstairs and we now have another free TV in our living room.

How We Watch TV Without Cable – from J.D. Roth at getrichslowly.com

How We Avoid Cable and Watch Free TV Online – from Liz at frugalwoods.com