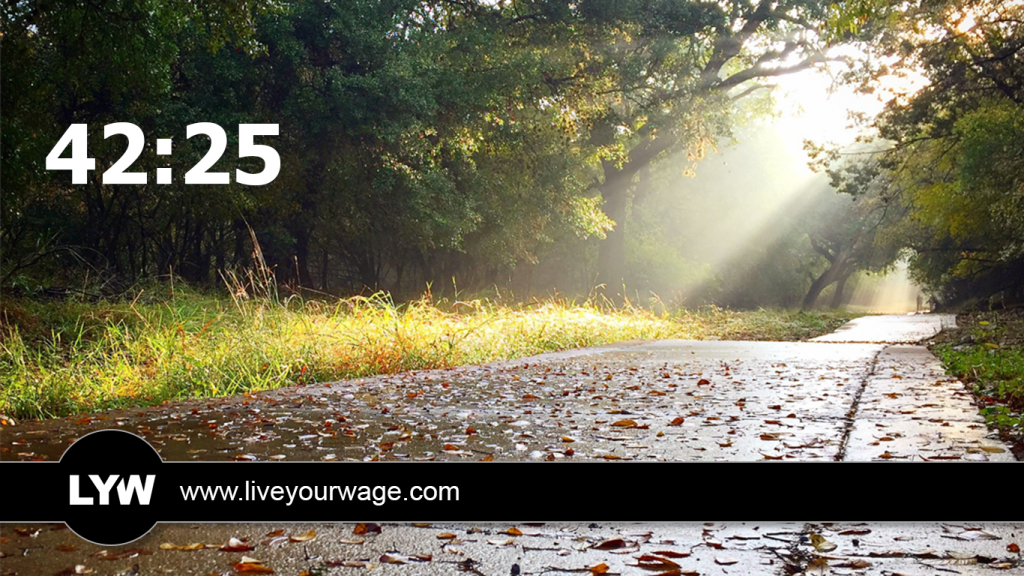 Last September, just after the birth of our 4th child, I started walking 3 miles every morning.

It’s not super-athlete stuff, but after 15 years of flying a desk for a job and generally ignoring physical activity, I needed to make a change as Father Time attempts to catch me from behind.

Walking has been shown to have tremendous long-term health benefits, and the mental benefits of starting my day in the woods of our local park were a nice benefit too.

I use an app on my phone to track my 3-mile jaunts each day, but I’m not necessarily targeting a certain speed or time. The goal: Just getting up every morning and doing it.

Now, 9 months later, I’m still at it. My morning routine consists of getting my workout clothes on, getting the 2 older kids ready, fed, in the car, and dropped off at school, then I’m off for my workout.

It turns out being really uncomfortable makes me go faster than normal.Click To Tweet

Now my personality type is such that I’m either all in on something, or I’m all out.

I have a hard time doing anything halfway. So I made a deal with myself early on that I was going to walk every day no matter what.

That was a dumb idea.

I didn’t realize how dumb until January 23rd this year when it was POURING rain as I dropped the kids off for school. The whole drive home I was having a deep internal struggle.

Everything in me said it was fine to skip a day because of rain.

I eventually convinced myself that the rain would likely stop soon, so it wouldn’t be so bad. I pulled the car into the garage, went inside and shoved my phone into a plastic zip-lock bag, punched a tiny hole for my headphones, then proceeded outside into the still pouring rain.

And the rain. Never. Stopped.

Three miles later, I finally reached the reprieve of my garage a cold, soaking wet mess. I pulled my bagged-up phone out of my pocket and hit stop.

Discomfort For The Win!

It turns out being really uncomfortable makes me go faster than normal.

I find it’s often the same when managing our money.

Eating out less, or ditching cable, or shopping at thrift shops, or driving an older car, all in the name of spending less money can be a very uncomfortable place to be.

If you feel uncomfortable or strangled by slimming down your lifestyle, that's ok. I'm not sure it's supposed to feel good.Click To Tweet

But what if that discomfort is exactly what drives us to work harder and go faster to get out of the pouring rain of debt?

What if that uncomfortable zone is right where we need to be to change some of our bad spending habits?

There’s something to be said for discomfort as a motivator. It might not work for everyone, but it certainly works on me.

If you feel uncomfortable or strangled by slimming down your lifestyle, that’s ok. I’m not sure it’s supposed to feel good.

But if you can, embrace that feeling. Remind yourself that it’s not forever, even if it is longer than you prefer.

Since that day, I haven’t had to walk in the rain again. And today, 4 months later, I’ve still never beaten 42:25.

But who knows? One day it might rain again.

Note: While writing this I got curious about my second fastest time. That would be 43:44 on January 3rd of this year. It was 23 degrees outside. I’m uncomfortable just thinking about it.

The Case Against Being Better People

But Everyone Else is Doing It